What would you do if you were a tiny insect and prey to those swooping swirling creatures of the night that can track you by sonar?

You learn to jam the sonar.

Bertholdia trigona, a moth native to the Arizona desert, emits ultrasonic clicks at a rate of 4,500 times per second to blur bats' acoustic vision What species are moving amongst us now that have the same jamming capabilities for our senses... and how would we ever know?
Posted by Unknown at 12:50 No comments:

"there were never such devoted sisters..."

Some things just cry out for backstory, even though I know in my heart of hearts that the truth of the situation cannot live up to the possibilities. I like to think that this wasn't some one-off dispute that had got really out of hand, but evidence of a subculture of devoted-duellists who would travel Europe seeking to settle doctrinal disputes the old fashioned way.     One red bead on the rosary for every confirmed kill as a badge of rank.
Posted by Unknown at 12:47 No comments:

Typical government sticking their noses in where they're not needed.

Before Toma Petre's relatives pulled his body from the grave, ripped out his heart, burned it to ashes, mixed it with water and drank it, he hadn't been in the news much. That's often the way here with vampires. Quiet lives, active deaths.


“The trouble with the old stories,” said the old man, thick smoke clinging to his hair as he paused to draw on his cigarette and exhale luxuriously, “is that they never end properly.”

Since his audience consisted of two young drunkards in a Boston nightclub he didn’t get much of a reaction.  The two men, students by the look of them, lounged on the couch across from him and nodded wobbly heads for politeness sake.

“They have ends, but they don’t end,” the old man continued.   “They come back in different ways.   You should read some of the old folk tales from before Disney took his gelding shears to them.  Blood and fire, torture and death and no happy endings mostly.   They should have been allowed to rest in peace instead of dragged from their rest and prettied up.  Like putting a ribbon in a corpse’s hair.”

Another long draw on his cigarette.   “Still he ended up as a head in a frozen jar so the laugh’s on him.   Still awake from what I hear, frozen and aware.   Serves the bastard right.    Like Loki.”

Seeing no hint of recognition on the two listeners he explained.   “The god.   Well half god, half giant.  Chained to a rock beneath the earth, venom dripping on his face from a big bastard of a snake.   Frozen in place and aware of his pain forever.  Just like Disney.”

“Bullshit,” said the shorter of the two men opposite, but without acrimony.

“Probably,” admitted the man.   “Anyway my point is… my point is the stories should be left to end.  But they don’t.  Let me tell you about last week.

“A man came into this club, this very club.   He was a little older than you boys, tall and good looking in a don’t get too close sort of way.  Fair hair with a shine of red when he passed under the lights.   The sort of man that just stinks of skulduggery.   Don’t laugh, it’s a good word.  An old word.   Older than you think it is, that word.   Anyway he was a no good bastard is what I mean.   He bought drinks for people, he laughed and he joked and he flirted with all the best looking women.  Successful too, what we used to call honey-tongued.

“Anyway he ended up taking one of those girls, Sabrina or Selena or some such name, off by themselves for a little while.   And while he was out of the room someone else came in through the front door.   Oh she was something.   Tall and strong, long golden hair, eyes that burned blue.  Nobody could take their eyes of her but she didn’t look like someone here to dance.   Looked like trouble.  Looked like someone hoping to call in a debt.  And guess who she was looking for?

“The man himself was in the corridor outside the rest room, making out with Selena or Sabrina or whatever.  Getting hot and heavy.    Then all of a sudden she tries to pull away.   ‘Something’s burning,’ says she.   He just holds her all the tighter and then something screwy happens.   She makes this god awful choking noise and then pushes him away.    The guy’s lost all his swagger now, looks confused, scared.   He stumbles away and heads for the fire exit.   Meanwhile Sabrina or Selena stands up tall and straight, checks herself out in a mirror on the wall and smiles like she likes what she sees.

“Just then the debt collector woman comes barrelling through the corridor, and I swear to God she had a sword in her hand, a damn great sword.  Out she goes through the fire exit after Sonny Jim and she doesn’t come back.  Not that night anyway.   Meanwhile Sabrina, or Selena, or whatever the hell she calls herself now goes back to the club to drink some more and dance and get laid.   What do you think of that?”

“Still sounds like bullshit,” said the young man who’d spoken before, “how do you know what happened?  Were you watching them make out you sick old bastard?”

The old man drew on his cigarette again, “You know me too well,” he said.   Across the club he saw a tall woman enter, haloed in the light of the club entrance, eyes burning and a debt to collect.    He blew his smoke out across the men opposite, and the big guy, the more drunk one of the two coughed and looked angry.

“Let’s get out of here,” he said to his shorter companion, “I need some air.”   He pulled the other man to his feet and they turned to walk away from the old man, now looking confused and lost.

“Old word,” said his no longer drunk friend, opening the door and stepping out into the cold night air, “Comes from the Icelandic.  Skuldari.  Means someone who’s trying to skip out on a debt.   Let’s go get something to eat.”

In response to Studio30Plus prompt "Skulduggery"
Image by Tony Jacobson
Posted by Unknown at 10:23 3 comments: 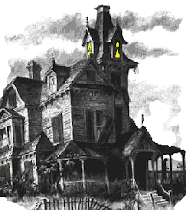